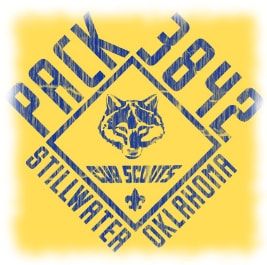 ​Advancement – The progression that moves the Cub Scouts from rank to rank.

Akela – Anyone who is a leader to the Cub Scout. Akela can be a parent, teacher, den leader, Cubmaster, or any other adult who helps guide the Cub Scout.

Belt loop: Belt loops are awarded when a Scout completes an Adventure.
​
Blue and Gold Banquet – Because February is the anniversary month of the Boy Scouts of America, many packs celebrate with a Blue and Gold banquet. The banquets are special events that can include games and entertainment.  Cub Scouts often bring their whole families including grandparents. Some packs may choose to hold their Blue and Gold Banquet in another month.

Buddy System – The buddy system is used to help Cub Scouts look out for each other. At Cub Scout events, especially outdoor activities, Scouts should find a partner. The buddies go everywhere together and know where each other is at all times. This helps ensure that the Scouts always have a partner to help him if he is lost or hurt.

Chartered Organization – Community or faith-based organizations that own and operate Cub Scout packs. They work under a “charter” from the Boy Scouts of America.

Class A Uniform – This is the official uniform of Cub Scouts. Cub Scouts wear a blue shirt, while Webelos can either continue wearing the blue shirt or switch to the khaki  Scout shirt. “Class A uniform” is not a BSA official term, but it is widely used by packs.

Class B Uniform – Class B uniforms are Scouting-related t-shirts. They can be pack t-shirts, day camp t-shirts or any other Scouting t-shirt. They are officially called special purpose or activity uniforms.

Council – A council is a service center, chartered by the Boy Scouts of America, that is responsible for Scouting within its geographical area.

Crossover or Bridging – A Special ceremony where a Webelos Cub Scout “crosses over” or “bridges” from Cub Scouts to Scouts, BSA. It symbolizes the bScouts induction into their Scout troop.

Cubmaster – A Cubmaster is the “face” of the pack. Cubmasters help plan and carry out the Cub Scout program in his or her pack. They support and motivate den leaders and parents. The Cubmaster serves as the emcee for pack meetings and other events. Cubmasters and pack committees work together to develop fun program ideas and activities.

Den – A den is a grade and gender specific group of Scouts. They work together to advance to the next level of Cub Scouts.
Denner – A child who has been selected (by vote or appointment) to serve in a leadership role in his den. They have specific duties such as taking attendance, leading a flag ceremony, assisting with den activities and conducting a closing ceremony. Serving as a denner helps develop the Cub Scout’s leadership skills.

Den Chief – An older Scout who has been selected to work with a Cub Scout den. They assist with den activities and serve as a role model (and often a friend) to the Scouts in the den. The den chief position is considered a leadership role by the Scout troop.

District – The geographic territory within a council is divided into districts. Districts vary in size. Some may span multiple counties, while others are one county. There may be multiple districts within one county, depending on its size.

Pack – A Cub Scout pack is a collection of dens of all ranks. The pack organizes the dens, holds monthly meetings and conducts larger events such as the Pinewood Derby or Blue & Gold banquet. Packs belong to a community organization, such as a church or a service club, which is chartered by the Boy Scouts of America to operate the Scouting program.
​
Pinewood Derby – Cub Scout racing event. With help from their parents, Scouts design and build a race car using a kit that contains a block of wood, plastic wheels, and axles made from nails.

Rank – Cub Scouts are grouped by grade or age into specific ranks.  The Scouts work toward their rank badge throughout the year. For example, the second grader is a Wolf, but he does not get his Wolf rank badge until he completes seven Wolf adventures.

Shoot-O-Ree - A council event where Scouts can earn their shooting sports award for sling shot, archery, and BB's. Overnight camping is generally available.

Webelos – This rank’s name has special meaning. It stands for WE’ll BE LOyal Scouts. Always use the S even when referring to one Webelos. So, one Webelos, not one Webelo.